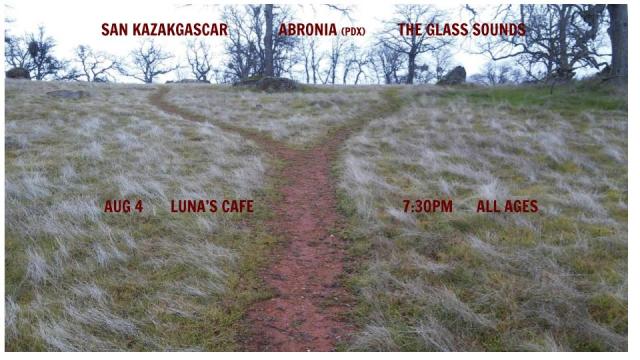 San Kazakgascar makes a rare appearance on Friday, Aug. 4 at Luna’s Cafe in Sacramento with Portland’s Abronia and newish local The Glass Sounds.  The show starts at 7:30 and is all ages.  More info. at Facebook.  This is a great line-up of heady psych, everyone offering up a different flavor.  Kazakgascar has been fairly quiet in 2017 as were are meditating on new music.  The Glass Sounds offer up a witch’s brew of aromas, and is the brainchild of Aaron Zeff and Lynda Rivera of Buk Buk Bigups, Quartz Thrust, and Vasas.  They will be bringing in the mayor of midtown, Scott Miller, for percussion.

Abronia is a group of Portland music vets, that include former members of Ghost to Falco, Eternal Tapestry, and others.  I like how they build their songs from slow burners to mountains of gold.  I hear elements of Morricone, Krautrock, free jazz, and drone/psych.  I asked Abronia founding member Eric Crespo a few questions about that band.

Dynamics are very important to me when I’m making my own music. From the sound of your album, could I assume that’s the same for you with Abronia?
Yes for sure, but it’s not really something I consciously think about too much.  Utilizing dynamics has always come pretty naturally for me.  It might just be as simple as having come of age in the soft/loud era of grunge.
Is having the one giant bass drum an effort to give the band something different than our peers?
It wasn’t really thought of as something to specifically set us apart.   The idea for a band playing around the one giant bass drum jumped into my head one day as a very clear image.  I think the idea was sort of a culmination of few different things I’ve been thinking about for a number of years–one of which is the constant struggle of trying to get the drummers I played with to play less.  So, giving the drummer just one big drum and a cymbal–the issue of overplaying is pretty much solved.
Another thing: For many years I’ve thought a lot about rhythm and thought a lot about rock music that is composed, but exists outside of the mama heartbeat rhythmic thing (say certain stuff by Captain Beefheart, U.S. Maple, Sun City Girls, etc.).  I’ve struggled a lot with whether I want to play music with a standard meter at all, but it really is satisfying to play in a comfort food sort of way.  I think having the atypical timbre of the big drum pounding out the straight ahead grooves makes the beats more interesting and palatable to me.  It makes me more excited to play music with a beat when it’s not just the standard keeping time on the hi-hat/kick, kick, snare, kick, kick, snare. 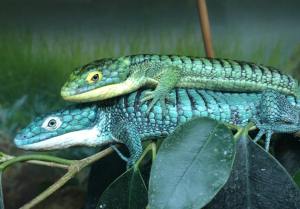 What non-musical things help inform the sound of Abronia?
Speaking for myself (I’m just one guy from this six person band), I like when I can hit on something that conjures up a specific image or feeling.  If I’m messing around on guitar  and I suddenly remember a specific section of a dream, or a view I’ve had from a trail, that’s the stuff I tend to want to explore further.  There’s a certain something I’m looking for when writing for Abronia and I think that’s all I can really say about that.  I don’t know how to explain it further.
What does the abronia lizard and the Abronia band have in common?
You know, I didn’t even know about that lizard when we named the band.  I was out backpacking in the Utah desert years ago when I came up with the idea for the band.  It was May and all the wildflowers were blooming.  One of the common flowers out there was called the sand verbena.  When I was researching that flower later I saw that the scientific name was abronia latifolia.  We decided on the band name and later I found out about the abronia arboreal alligator lizard.  Keelin says, the Abronia lizard is an endangered species and they are rather ornery and territorial.  Thinking about it now though…naming your band after an ornery lizard seems a lot more badass than naming it after a dainty little weed of a flower.  Maybe we should just start claiming that lizard as the inspiration (sorry sand verbena). 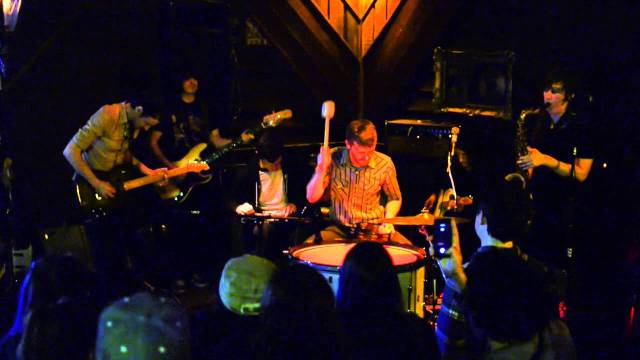 Check out The Glass Sounds’ sounds

A CoOp label for myself and my friends.
View all posts by latherrecords →
This entry was posted in Uncategorized and tagged abronia, luna's cafe, san kazakgascar, the glass sounds. Bookmark the permalink.