Posted on January 9, 2014 by latherrecords

2013 felt like a year of regrouping and transition in my music dome.  There were fewer live dates and various recording projects inched along like a mid-December line at the post office.  If the past is any indicator, these pauses are usually followed by exciting splashes of activity.

Paul Takushi played his last show with San Kazakgascar in February.  We decided not to rush out and start a soul-crushing string of drummer tryouts.   Instead, we waiting in the bushes waiting for the right prey to wander by in our cross hairs.  That victim is none other than Tony Passarell, the “godfather of the Sacto free jazz scene.”  Known more for his sax playing, Tony has stepped in to help with Kazakgascar’s transition into a different beast.  No singing, less structure, and more experimentation.  We just recently started playing with him and I’m excited to see where it will go. 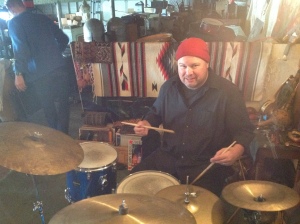 Tony Passarell in the house.

Before Tony joined Kazakgascar, we performed as a trio at NorCal Noisefest #17.  You can listen to the carnage here.  Our Drought Times EP received some nice reviews, including this one from Terrascope UK.  I made a slide show video thang for “Crispy Lords” – check it out below.

Speaking of Tony Passarell, Swimming in Bengal is still pulling together some recordings for a release this year.  There is even talk of trying to incorporate dueling tabla players.  We’ll see.

For the last few years I’ve been saying that the lost Harvester album was almost done.  Well it’s looking like Mt. Tallac is ready for a proper release in 2014.  We’ve condensed the 15 songs we originally recorded a few years ago into 8 cohesive nuggets of middle-aged earnestness.  We also plan to dust off the C# guitars and play shows in Chico, Sacramento, and Portland.  Details to come…..  Check out a song from the album below.

An oldie, but goody….

I actually bought some current releases this last year!  I recommend all of these – The Ex and Brass Unbound – Enourmous Door, Quasi – Mole City, TV Ghost – Disconnect, and Group Inerane – Guitars From Agadez Vol. 3.

A CoOp label for myself and my friends.
View all posts by latherrecords →
This entry was posted in Uncategorized and tagged harvester, lather records, mt. tallac, san kazakgascar, swimming in bengal. Bookmark the permalink.