Looking Back at the Lookyloos

From 1996  to 2006  the Lookyloos held a special place in the Davis/Sacramento music scene.  They took an unapologetic commitment to jangle pop and rode it for 10 glorious years.  Surrounded by peers that were either louder and noisier or more polished and commercial, the Lookyloos trusty VW Bus threaded the scene needle with nary a care.  Well, maybe a little grumpy care.  Inspired by many of the bands on New Zealand’s Flying Nun label, the trio of Eric Janssen (guitar/vocals), Paul Takushi (drums), and Dave Thompson (bass) put their own flat-lander stamp on esoteric guitar pop.  The band released two full-length recordings on Lather Records.

1st album: Perhaps the most satisfying joy left to us in an age so limited and vulgar as our own

Listen to “Enchanted” from the first album Perhaps The Most Satisfying….

On the band’s vision and whether it was achieved, Janssen said, “Dave and I started the Lookyloos because we both have a love of pop music.  I was writing pop songs for the Curbfeelers that didn’t feel right for the phase that band was in, so Dave and I decided to start a pop band.  In terms of songwriting, my idea was (is?) to write the quintessential, perfect pop song.  A shifting target, which hopefully then makes not every song sound similar.  Of course 100% success is totally elusive, but there are a few songs on both records (more on the second record than on the first?) that are exactly what I was shooting for.”

Harold and Maude arrive early to Lookyloos show to get good seats.

When pressed for a favorite Lookyloos song, Janssen waxed cinematic, “Dunno if I have a favorite LL song, but I think the Harold and Maude song is definitely among my favorites (“Nobody Sends Black Flowers” on second record).  The reason for this is that it has a really neat hook, a text book pop bridge, and it has “I love you” in it at the end.  Pop ingredients.”  Live video of said song below:

Janssen added: “Some more songs that are faves of mine: “Actress” I think comes real close to the vision of pop music that I had at the time.  I got more stripped down in that regard with the second album, songs got shorter and less complicated, but always some kind of reference to pop culture, somewhat jangly I suppose.  And hopefully a melody that can stick in the mind/earhole.”

When asked what the Lookyloos’ strength was, Takushi quipped, “Their drummer.”  He added that the band was also good at “Talking for hours on end about Star Trek, Star Wars, the Lord of the Rings, and bands from Australia and New Zealand.”  Finally, taking off his comedian hat, he noted, “We were meticulous. Any band that spends four years mixing an album has got to be meticulous.” 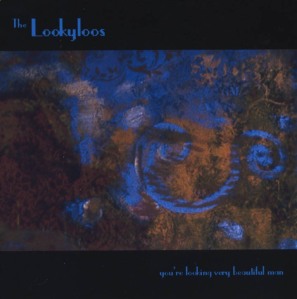 One of my favorite Lookyloos songs is “Three Years” off of the 2nd album.  Not only are the Verlaines mentioned in the lyrics, but the song includes a tense little Verlaines-style crescendo at the end of the chorus.  I also like how the sparseness in the verse lets the story by heard.  Listen to “Three Years.”   Speaking of kiwi love, you can hear the Lookyloos cover of The Clean’s “Dunes” from a 2004 live performance on KDVS 90.3.   Listen to “Dunes.”

A CoOp label for myself and my friends.
View all posts by latherrecords →
This entry was posted in Uncategorized and tagged curbfeelers, dave thompson, davis, eric janssen, harold and maude, kdvs, lather records, lookyloos, paul takushi, sacramento, the clean, verlaines. Bookmark the permalink.